Hear Philip Wolfhagen in conversation with Maria Stolijar where he talks about the importance of the colour wheel, mixing paint and the influences that guide his practice.Maria's podcast, Talking With Painters is an insight into Philip's studio practice.
​Listen now to the podcast on the link.

Experimental Garden No. 5, oil and beeswax on linen, 62 x 204cm
Philip Wolfhagen's new body of paintings for his solo exhibition with Philip Bacon Galleries in Brisbane have now arrived at the gallery. The exhibition will open on the 15 October and closes 9 November 2019. Philip will be at the opening on Friday 18 October. Please contact the gallery if you would like to preview the works.
Philip Bacon Galleries, 2 Arthur Street, Fortitude Valley QLD 4006, Australia Email info@philipbacongalleries.com.au                Phone +61 7 3358 3555

Approaching the cusp, oil and beeswax on linen, 3 panels 46 x 170cm
Philip Wolfhagen is a finalist in this years Hadley's Art Prize. His work Approaching the cusp was selected from 630 entries. On Friday night he was one of four artists to be presented with the Highly Commended Award by judges Jane Clark, Raymond Arnold and Susan McCulloch.
Philip's new enquiry is investigating the light on the landscape as the evening closes in.
"I find the approaching gloom of night a visually exciting time; the mutability of light, and inevitable loss that brings on an urgency and serves to heighten all of the senses. The fleeting moment when our perception of colour is almost lost, but the darker forms in the landscape take on a precise tonal weight, is an ongoing area of interest for me." 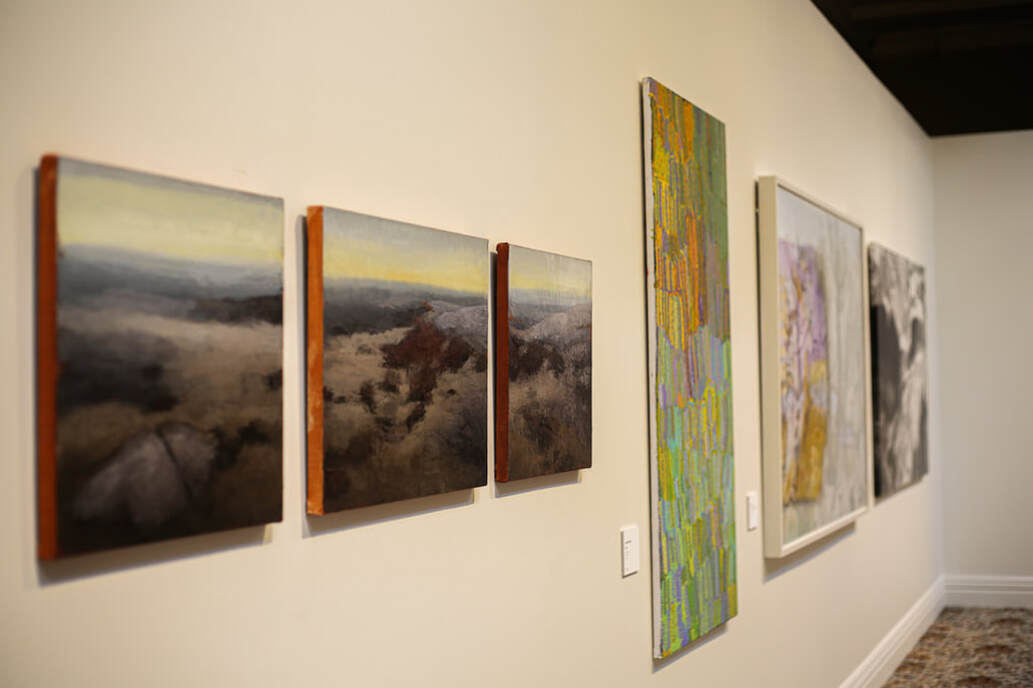 Elegy in Five Parts, 2018, oil and beeswax on linen, 5 panels, overall dimensions 120 x 280cm
Philip Wolfhagen will be showing a major new work with Dominik Mersch Gallery at Sydney Contemporary from 13-16 September. The five panel work titled Elegy in Five Parts explores ideas about grief and sorrow. The work can be seen at Booth E08 at Sydney Contemporary, Carriage Works in Sydney. ​

Artist Profile in the latest issue of Art Collector ​ 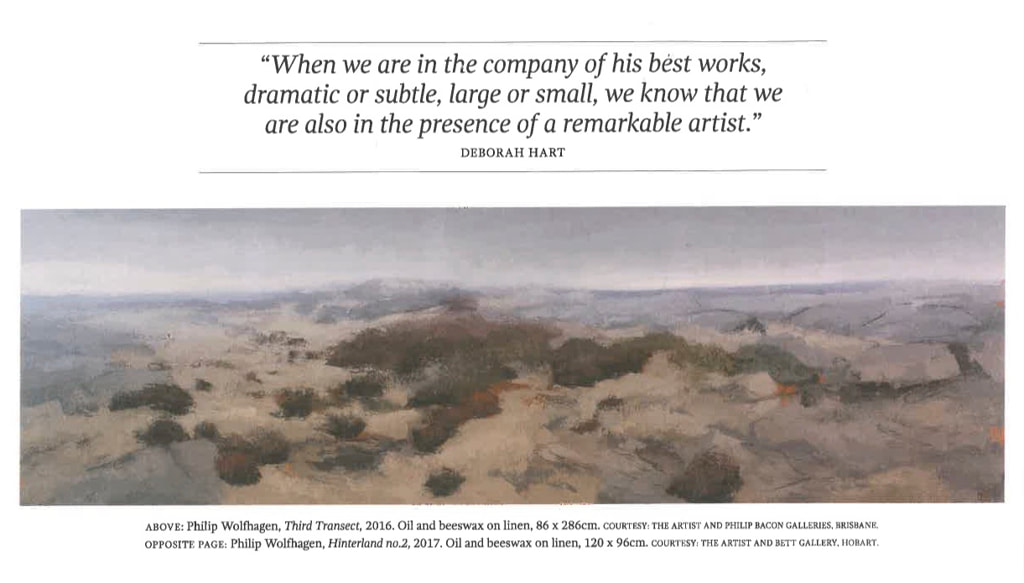 Philip Wolfhagen's new multi-panel paintings for his upcoming exhibition 'Elegies', have been featured in the July-September issue of Art Collector in an evocative article written by Briony Downes titled 'In Our Nature' on pages 162 - 167.

"There is no doubt Wolfhagen is an expert at the atmospheric. He has held a longstanding fascination with the works of 19th century artist Caspar David Friedrich and French Baroque painter Claude Lorrain. His paintings often reflect the [Tasmanian] landscape around him; the grey lilac skies of early morning over pasture or the crackling embers of a distant fire. ... It is a view that has been studied intently by Wolfhagen for more than 20 years."
'Elegies' will open at Dominik Mersch Gallery in Sydney on Thursday 27 September. 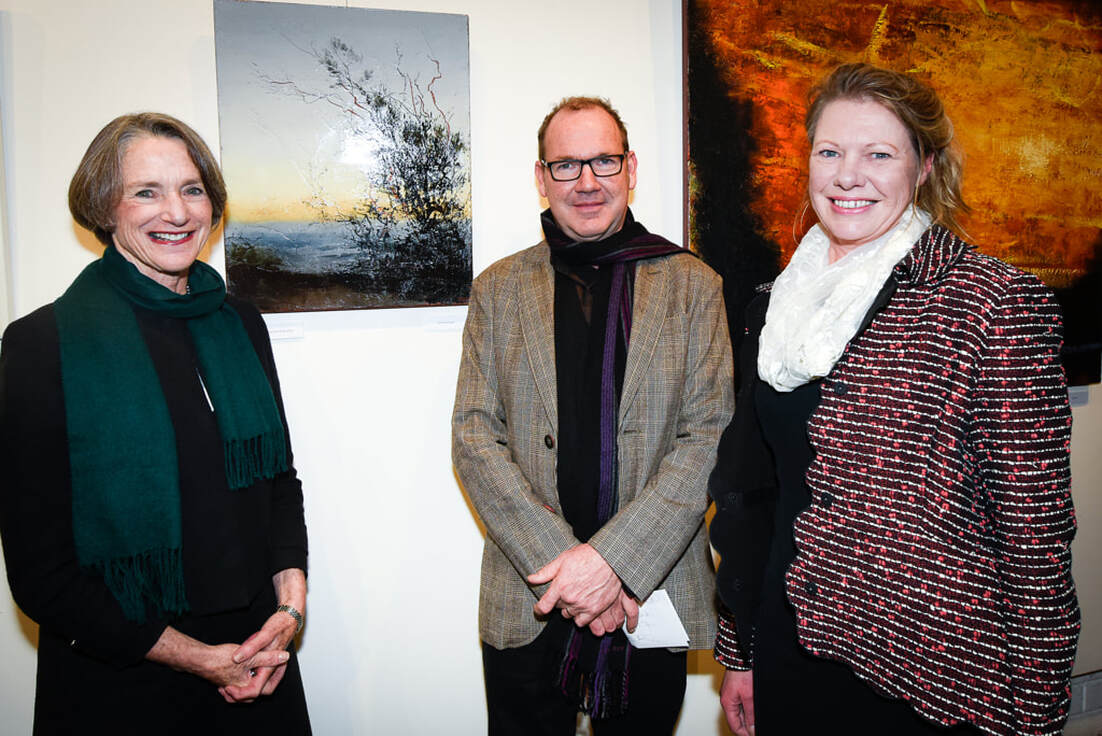 Major artwork acquired by the National Gallery of Australia ​

A litany of vapours, 2007, oil and beeswax on linen, 200 x 941cm overall
The National Gallery of Australia has acquired A litany of vapours, a major work by Philip Wolfhagen. Over seven panels, the drama of the weather system of cumulous clouds building over Ben Lomond.
The acquisition was made possible by the efforts of the NGA Foundation Fundraising Gala Dinner. Dr Gerard Vaughan, Director of NGA said in his address on the night “we are continuing our commitment to bringing works of national significance into the NGA’s collection. We are delighted to be able to focus this year’s Gala Dinner Fund on the acquisition of Philip Wolfhagen’s breathtaking panorama, arguably his magnum opus.” 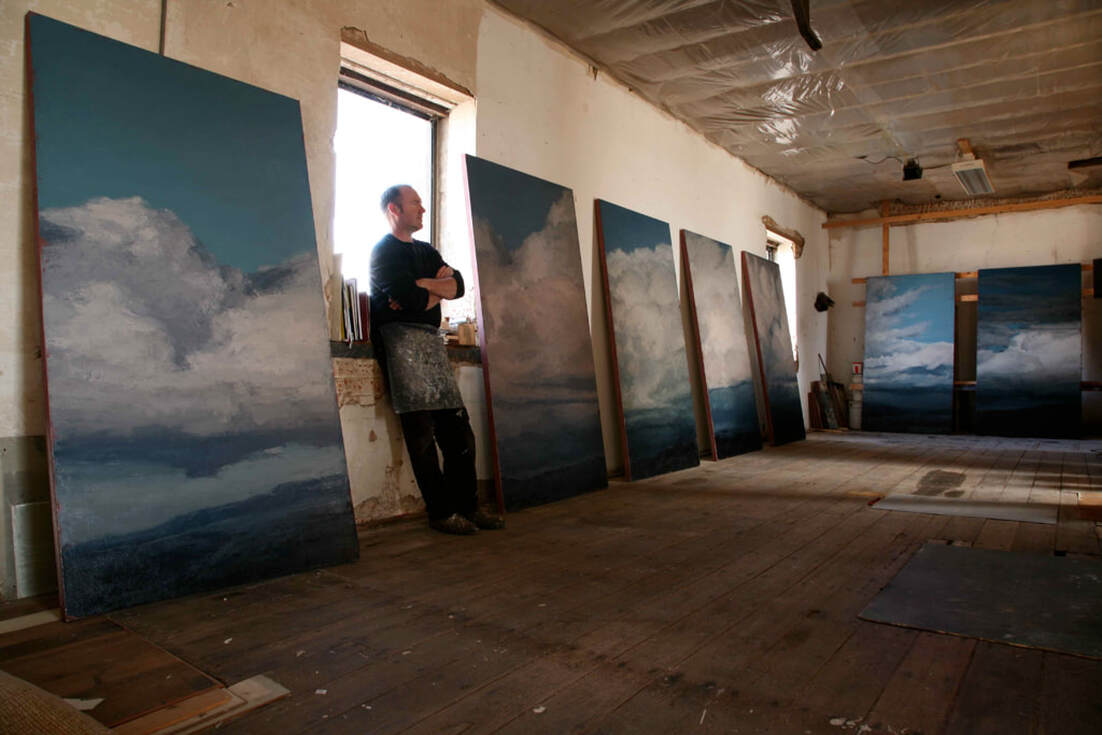 Wolfhagen in the studio with the 'litany' panels, 2007
Clouds have been a recurring theme in Wolfhagen’s work. Inspired by the cloud studies of English painter John Constable (1776-1837), Wolfhagen has returned again and again to this painterly subject matter.

Deborah Hart, Head of Australian Art at NGA has described the work as one of the great achievements of contemporary painting in the first decade of the 21st century. “A litany of vapours suggests the transient nature of weather patterns and their effect on the earth. Yet, in the interplay of light and dark and variously radiant clouds from one panel to the next, Wolfhagen reminds us that these apparently evanescent natural phenomena can convey tremendous dramatic presence and evoke a sense of poetry and music.”
A litany of vapours was painted for the exhibition Wonderful World, the premier exhibition at the opening of the Anne & Gordon Samstag Museum of Art in Adelaide in 2007. More recently it was exhibited at the Queen Victoria Museum and Art Gallery, Launceston in Transformations: the art of Philip Wolfhagen which opened in November 2016.

Transformations: the art of Philip Wolfhagen opens on Friday 4 November 2016 and runs until 5 March 2017.​

Transformations is an exhibition of some of the artist’s rarely seen works. From 1989 to the present, it focuses on major works commissioned or undertaken for specific sites and themed exhibitions in public museums and art galleries. These special projects have called upon the artist to respond to places and concepts beyond his studio practice. There are recurrent motifs, such as the serial image or multi-panelled compositional device used to convey the passage of time, and the use of atmospheric phenomena to express his concerns about the fragility of the natural world.
Philip will give an artist's floor talk at the gallery on Saturday 12 November at 11am.
The exhibition has been co-curated by Philip and Catherine Wolfhagen.

Skeletal Remnants no. 2, oil and beeswax on linen, 62 x 204c
Philip Wolfhagen's solo exhibition Re-visions opens in Brisbane at Philip Bacon Galleries on 23 September 2016. The exhibition includes 18 new works based on the Tasmanian midlands landscape and the highlands of Ben Lomond. Exhibition runs until 15 October 2016. 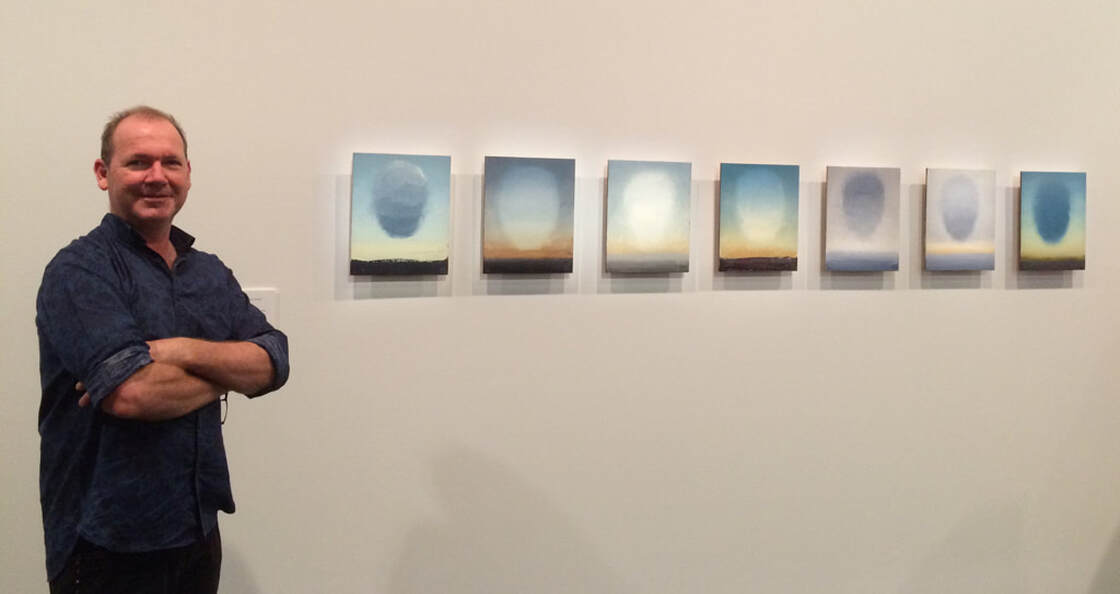 Skeletal Remnants no. 2, oil and beeswax on linen, 62 x 204c
Philip Wolfhagen was one of 30 invited artists in this years prize. The $50,000 invitation-only, acquisitive prize is held by The University of Queensland every two years. Philip's self-portrait titled Seven states of being, is painted on seven plywood panels.
You can download the catalogue here.

Alpine Transect, 2015, oil and beeswax on linen, 91 x 300cm
Philip Wolfhagen is a finalist in this year's Wynne Prize at the Art Gallery of NSW. He was one of five artists shortlisted for the prize. His painting titled Alpine Transect is a return to the highlands of Tasmania as his source. The Archibald, Wynne and Sulman prize exhibition runs until 27 September at the AGNSW

The Serpentine Path, 2015, oil and beeswax on linen, 96 x 338cm (3 panels)
Philip Wolfhagen's exhibition Other Worlds opened at Karen Woodbury Gallery in Melbourne on Wednesday night. The exhibition runs until 31 July. If you are unable to visit the gallery you can see installation shots and images of the works on the gallery's website

llumination: The art of Philip Wolfhagen the first comprehensive survey of his art practice to date, is due to open at Hamilton Art Gallery in VIC on Wednesday 12 November. This national touring exhibition has been curated by Newcastle Art Gallery and Tasmanian Museum & Art Gallery and has now traveled to galleries in ACT, QLD, NSW and VIC. It opened in June 2013 at TMAG in Hobart and Philip will be attending the opening in Hamilton to celebrate the end of the tour.
The exhibition runs until 1 Feburary 2015.

​The documentary 'Skullbone Plains' aired on ABC TV on Tuesday 28 October. The half hour program documents the journey of the artists involved with The Skullbone Experiment exhibition. From the artists retreat at Skullbone Plains in Feburary 2013, the camera follows them into their studios to see the process of creating the artworks for the exhibition. You can now see the documentary on ABC iView on the link below.
​
http://iview.abc.net.au/programs/skullbone-plains/AC1310T001S00

llumination: The art of Philip Wolfhagen the first comprehensive survey of his art practice to date opens at Tweed River Art Gallery in Murwillumbah, NSW on Friday 8 August. Philip will attend the opening to give an exhibition preview talk.  The exhibition runs until 12 October.
The exhibition will then travel to its last destination at Hamilton Art Gallery (Vic): 15 November 2014 - 1 February 2015

The Skullbone Experiment: a Paradigm of Art and Nature ​

Acquisition by the University of Tasmania 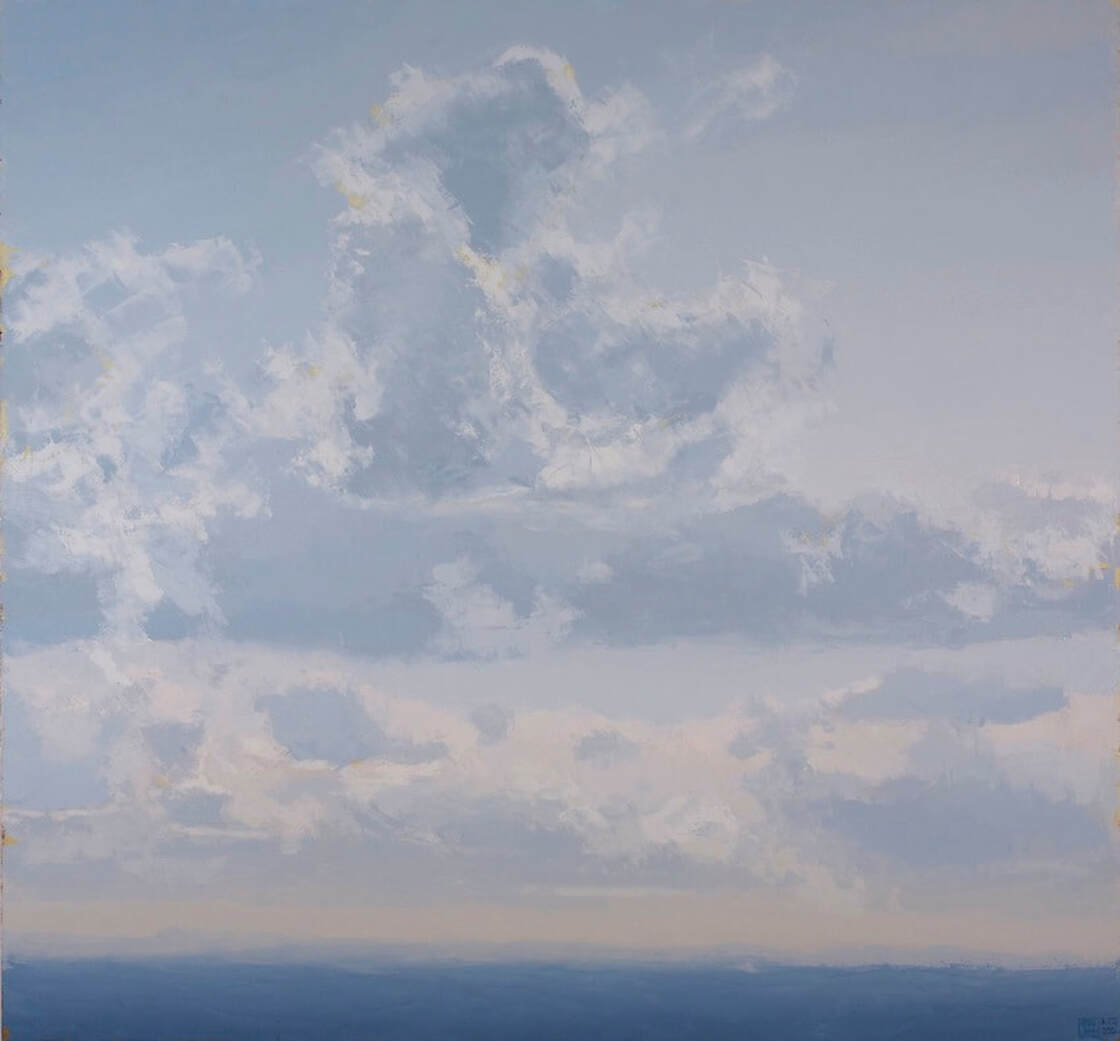 Philip Wolfhagen Eighth Exaltation, 2013, 200 x 214cm
The University of Tasmania has recently acquired a major work by Philip Wolfhagen for its collection as part of its 125 year celebration.

Illumination: The art of Philip Wolfhagen

The Tasmanian Land Conservancy (TLC) is a science-based, not for profit organisation protecting private land for conservation in Tasmania. In February 2013, ten artists accepted an invitation from the TLC to spend four days on an artist’s retreat at their wild and remote reserve, Skullbone Plains in Tasmania’s central highlands. 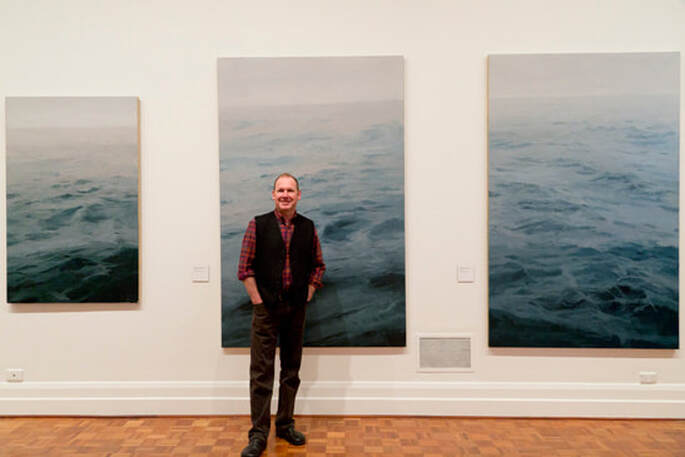 The Tasmanian Museum and Art Gallery (TMAG) is delighted to welcome the first major survey exhibition of Tasmania’s award winning artist, Philip Wolfhagen, to our Argyle Galleries from today.
Illumination: The art of Philip Wolfhagen has been developed in partnership between the Newcastle Art Gallery and TMAG, and features over 50 key works.

“This major touring exhibition had its first showing at the Newcastle Art Gallery in June of this year and I am delighted that TMAG is the next host before the exhibition goes on to tour other states and the ACT,” TMAG Director, Bill Bleathman said.
“It is indeed a great honour to be part of the team bringing the work of this important Tasmanian artist to national prominence."
“TMAG has worked closely with the Newcastle Art Gallery and the artist and we look forward to developing more collaborative exhibitions of this type into the future.”
The exhibition will feature at seven venues across four states and the Australian Capital Territory.
Based in Longford, Wolfhagen has always been committed to the landscape genre which has a long tradition in Australia, saying he strives “to see the landscape in a new way and to feel as passionate about painting it as I do about preserving it.”
Wolfhagen is described as a master of creating works that capture changing light, mood and atmosphere and considers himself a ‘stay-at-home kind of artist’ and says of his work “I want to paint what I understand and love and not rush about being a tourist artist.”
​
It is not only the Tasmanian subject matter and his portrayal of it that makes his work so fascinating but the surface itself, created by a process of mixing beeswax with his colour pigments giving the works a luscious, creamy tactile quality.
“Wolfhagen is one of Australia’s most insightful landscape painters. He is one of three Tasmanians represented in the celebrated exhibition Australia that opens next week at the Royal Academy in London,” TMAG’s Principal Curator of Art, Jane Stewart said.
“I urge everyone to come and experience the evocative paintings that make up this stunning exhibition.”
The exhibition is accompanied by a major publication sponsored by the Gordon Darling Foundation that features six new essays on the artist including The island seen and felt: some thoughts about landscape by renowned Australian author, Tim Winton.
Illumination will tour to the ACT, Queensland, and Victoria, assisted by the Australian Government through the Australia Council, and supported by the Newcastle Art Gallery Foundation and International Art Services, and in Tasmania by the Friends of TMAG.